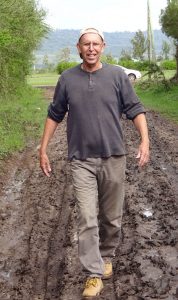 A graduate of St. Xavier High School Class of ’72 and Xavier University, Cincinnati, Ohio, Ed Colina received a degree in Theology in 1976 and later a Masters in Education. After eleven years of teaching, Ed became an Elementary Supervisor for the Diocese of Covington, Kentucky. Eleven years later he took on the administration of the largest Catholic elementary school in the diocese. After completing 26 years of education-based work he left his job as administrator, sold his home in Northern Kentucky, gave away most of his possessions and began his work outside Nairobi, Kenya in September 2007.

Traveling to Africa, Ed volunteered with a renowned organization and NGO, Nyumbani. In February of 2008, Ed began his solo projects to aid poor Masai women and children living in Athi River, Kenya. Supported by friends and relatives, former colleagues and school families, Ed took up residence adjacent to the Masai settlement and continues to live and oversee Education, Health and Community projects in that geographic area today. Ed has three adult children and four grandsons in the United States who continue to support his work.