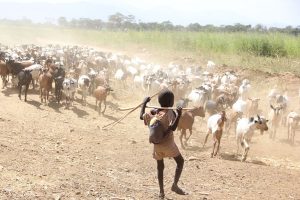 Benson Lotiang’a has allowed me to share this story with you to give some insight into the life of his people in Turkana. I was there in Kakuma on Wednesday and left Friday. We were able to spend time with Ben’s sister, mother and his brother, Lomori. I left Ben there, living with his family until he flies back to Nairobi on July 2.

This morning Ben called me from Kakuma with the sad news that his brother’s young son died last night. James Ngasitae, 11 months had been sick for two days and taken to Kakuma Mission Hospital. According to the doctors, the boy had high fevers, convulsions and a high rate of malaria parasites in the blood. He was anemic, low red cell count. Ben’s brother still does not know that the child has died. He had headed out to far places to look after their goats. The mother is inconsolable and hoping to end her own life due to this trauma. This is the second child of hers who has died.

So Ben and his sister (a strong young woman) went to the hospital, settled the bill, received the death certificate and rode with the child in their arms on a motorbike down dirt paths to Ben’s brother’s home. There a hole was dug and the child placed after some prayers. It is finished.

God bless James Ngasitae, his family and all those who suffer so much.